Doing whatever Jesus tells us to do: Only possible if we always listen to him

Posted by junix28 on January 19, 2013 in Homilies, Homilies and Reflections 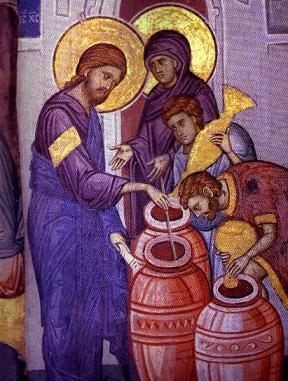 On the 16th of October 2002, the late Pope John Paul II issued an Apostolic Letter on the Most Holy Rosary of the Virgin Mary. In it the Pope declared that another set of the five decades is to be added on to the traditional formula. This was to be done because, as the Pope noted, the Holy Rosary is a compendium of the gospel, and for it to be a compendium it has to have not only the meditation on the childhood, the suffering and death, and the resurrection of Jesus but also of his life and his ministry. Thus, the Pope added the Mysteries of Light (i.e. “to include the mysteries of Christ’s public ministry between his Baptism and his Passion)” [John Paul II, Apostolic letter RosariumVirginis Mariae #19) to the traditional pattern of Joyful, Sorrowful and Glorious mysteries. So in our meditation on this  mystery of light, we reflect on (1) Jesus’ Baptism in the Jordan, (2) his self-manifestation at the wedding of Cana, (3) his proclamation of the Kingdom of God, with his call to conversion, (4) his Transfiguration, and (5) his institution of the Eucharist.

We noticed that our gospel today is about the Second Mystery of Light, and it is called the self-manifestation of Jesus. How did Jesus reveal himself here? We heard in the gospel that Jesus transformed the water into because the wine for the wedding feast was running out. In a glance, we might just say it is just one of the miracles that he has performed, but upon further and deeper reflection, it tells us of a sign of a deeper reality. It tells us that God is really with us. And much more, God is not just here with us (Emmanuel) but he is active among us. He is looking after us. He is filling in our lack and our shortages. He is present among us now.

Christ is revealing himself right before us now as we celebrate this Eucharist. According to the Second Vatican Council, He is present here with us now in the Words of the Scriptures being read, in the Eucharist that we are going to receive shortly, in the person of the minister and in the whole assembly.

So we need to ask ourselves: Are we paying attention to the presence of Jesus Christ among us now? Have we ever realized his presence in a more real and personal way every time we come to Mass?  If our answer is no then let us not be desolate or disappointed.

Let us remember that in the gospel Jesus didn’t perform the miracle because he really wanted it from the beginning. Mary, his mother was there. She noticed the lack. She had been observing the needs people might have at the wedding. Then she went to her son, even if in a way she was told off.  She didn’t get disappointed. In fact, she believed  and trusted that her son would do something. So she went to the servants and told them: ‘Do whatever he tells you.’ The servants took her word seriously and obeyed what Jesus told them which is to ‘fill these jars with water.’ And because they did whatever he told them to do, they were privileged to witness the first miracle that Jesus did at the beginning of his ministry.

What can we gather from our gospel today then?

Two things: First, it tells us that if we just listen to Jesus through the intercession of Mary his mother and do whatever he tells us to do, something good and wonderful can happen. But how serious are we in doing whatever Jesus tells us to do? Sometimes we tend to do the other way around. Sometimes we expect God to do whatever we ask of him. Sometimes, we tend to distort the message of the gospel to accommodate our personal whims and interests. But this should not be the case in us. However, as Bishop Edward Burns in Alaska (whom I followed on Twitter) wrote on his twitter account this morning ‘The message of Jesus Christ is meant to change us, we’re not meant to  change the message.’ There are also times when we tend to just listen half of the message of the gospel and supply our own personal interpretations on it. No wonder not all our prayers are answered. No wonder not all our wishes are fulfilled. Listening to Jesus as Mary urges us and obedient to him comprise our vocation as Christians. Let us listen to him as he speaks through the Scriptures, through the Church, and through the people, situations and experiences we have. We have to acknowledge the fact though that listening to whatever Jesus tells us to do is indeed a challenge especially for us now being caught up with a busy lifestyle, because it challenges us to re-assess our priorities. It challenges us to face the reality of ourselves and of others. But if we do, something good and wonderful happens in us, in others and in society.

Here is an example of this. There is another Filipino Archbishop from Cebu (popularly called Monsignor Teofilo Camomot) who is now on the process of being beatified because of his saintly life until he died  in a car accident in 1988. He listened to Jesus and always looked for Christ through the poor and the needy. I have personally heard from the nuns of the Order he founded (Daughters of St Therese) of his holiness and extraordinary love and care for the poor and the needy. Anecdotes on his life and good works abound in the towns whose people were greatly affected. He was known to give away his shoes to the poor when they needed it. He would rather go barefoot than see someone unshod. Even his Episcopal ring and pectoral cross were not spared from his famed generosity. People would knock on his door to ask for alms, and when he had no money to give, he would give them his cross and his ring for them to pawn. Employees from the local pawnshops easily recognize his cross and ring, as these objects had been pawned several times. They would give him a call and say, “Msgr. Lolong, your ring is here again …” His good friend, Ricardo Cardinal Vidal once noticed the missing cross, and bought him a new one, and pleaded with him not to give it away.

One day, a hold-upper tried to victimize the monsignor on his way home from a confirmation. The robber demanded his money. Msgr. Camomot was saddened not because he was being robbed, but because he had no money to give the man. He had left his stipend with another priest, and all he had left in his pocket was P20. Still, he turned it over to the robber. He had already gone quite far when he asked his driver to turn back to the scene of the crime. He hurried after the thief and gave him his ring and cross to pawn! Archbishop Camomot’s ways are almost unthinkable for ordinary mortals; but for someone who has achieved a high degree of sanctity, such acts are very possible. Perhaps the monsignor looked at the robber through the eyes of Christ, and saw him not as a thief, but someone who needed money badly.

Second, Our gospel today also tells us that if we listen to Jesus and do what he asks us to do, we come to know and grow in wisdom to understand our priorities and values in life. Mary has realized this first, and this assured her faith and trust that Jesus wouldn’t really let her down even if at first she’s in a way being told off. The servants also experienced this when they unhesitatingly obeyed what he commanded them to do. The jars were meant to store waters for the Jewish ritual of  washing themselves, yet because the servants listened to him, Jesus had transformed the value of the water into a special kind of wine that was enjoyed by everyone in the wedding. Listening to Jesus then enables us to understand and appreciate the many gifts that each one of us brings for the enrichment of the community. It is only through listening to Jesus that we understand that all that we are and all that we  have are coming from one, the same and only source, God himself. This is what St Paul wanted to remind the Christian community in Corinth of as we have heard in our second Reading today. When the Corinthians asked him of the many different charism or gifts each of them had, that somehow caused them to feel superior over another, St Paul told them, that though there are many gifts and works of service, they all stem from the one Spirit, the same Lord working in each and everyone of them according to their means and capacities. Thus, they must appreciate and serve one another (1 Cor 12:4-11).

So  listening to Jesus then is our mission for the day and for the rest of the week. We can listen to him by being true to ourselves  and by looking for him through one another.  So our prayer must be then: that we may persevere in listening to Jesus and doing our best to do whatever he tells us to do. Amen.

← Baptism of Jesus: Moment of Grace for us
Having God and letting Christ →

One comment on “Doing whatever Jesus tells us to do: Only possible if we always listen to him”