A journey in faith…
3 Comments

The EUCHARISTIC SPECIES: The REAL body and blood of Jesus Christ

THIS IS POWERFUL!!!!! PLEASE TAKE THE TIME TO READ IT AND PASS IT ON  TO OTHERS. 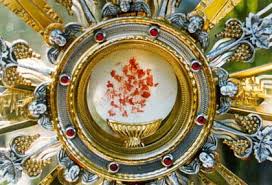 Dear friends this is a homily given by Father Jeffrey Montz, distributed by his friend. This is a very moving reflection on how real the body and the blood of Jesus that we always receive in the celebration of the Holy Mass.

I am the bread of life. In the year 2009, I was distributing communion to the faithful when a young woman approached and extended her hands to receive the Eucharist. Almost as soon as I had placed the Host in her hands, she began moving away and in the process she dropped the host. Standing over the fallen Host lying on the ground, a slight giggle, shrug of the shoulders, and re-extended hands, her body language said to me, ‘Ooops, I dropped it. Can you give me another one?

I am the living bread that came down from heaven; whoever eats this bread will live forever; and the bread that I will give is my flesh for the life of the world.

August 15, 1996 an elderly Eucharistic minister was distributing the Precious Body of Christ to the faithful in a parish in Buenos Aires , Argentina when a similar accident occurred. Not wanting to consume the Host because it was dirty after falling to the ground, he asked the priest to pick it up. Reverently the priest placed the Host in a receptacle of water and put it into the Tabernacle where it would dissolve with time. Six days later when the priest examined the Host that should have been dissolved by now, he was perplexed by what he saw. The Eucharist seemed to have grown in size and was covered with red splotches.

Leave it for a few more days, he thought; it’s just a matter of time. But then with each passing day the Sacred Species took on the appearance of coagulated blood, until eventually the Host looked like a piece of flesh. The bread that I will give is my flesh. A miracle! Perhaps, but first this had to be investigated. A lab in Buenos Aires examined a sample from the Host. The scientist discovered red blood cells, white blood cells, and hemoglobin, but what perplexed him the most was that the cells were moving and beating.

Three years later Dr. Ricardo Gomez was called in to perform a more thorough examination. He sent a sample from the Host to a lab in New York but didn’t tell them what it is; he wanted them to tell him what it is. They did. It’s a  living muscle from a human heart.

Now the year is 2004, Dr. Gomez had located a unique doctor named Frederick Zugibe whose expertise in examining the heart of a dead person allows him to know the nature of the person’s death. He too was given an opportunity to examine the Host without knowing that this heart was formerly a round wafer of wheat bread. His findings?

The heart belonged to a person who had been severely tortured. So Pilate wishing to satisfy the crowd, released Barabbas and after flogging Jesus, he handed him over to be crucified.

After his examination, Dr. Zugibe passionately said to Dr. Gomez, You have to explain one thing to me, if this sample came from a person who was dead, then how could it be that as I was examining it the cells of the sample were moving and beating? If this heart comes from someone who died in 1996, how can it still be alive? When Dr. Gomez explained to Dr. Zugibe that it was the Eucharist, he nearly pulled his hair out of his head in shock.

Backtrack to the 8th Century in Lanciano, a town in southern Italy where a priest was celebrating the Mass doubting that Jesus is truly present in the Eucharist. As he raised the Host, it instantly transformed into a piece of flesh in his hands. In the 1970’s this piece of flesh, which remains available for veneration to this day, was tested by a leading Italian doctor. His findings? It is living muscle from a human heart. Dr. Gomez decided to cross examine the Host from Buenos Aires with this Host from Lanciano.

Amazingly, both hearts were found to have come from the same person. I am the living bread that came down from heaven; whoever eats this bread will live forever; and the bread that I will give is my flesh for the life of the world. My brothers and sisters, our faith proclaims to us the wondrous mystery that Jesus Christ is truly, really, and substantially present in the Eucharist, the Bread of Life. It’s no mere symbol, no mere reenactment. It is the Precious Body, Blood, Soul, and Divinity of Jesus Christ! What I place in your hand or upon your tongue is not a ritual piece of bread. I place God in your hand! I place God on your tongue!

I know that even after telling you the story of the Eucharistic miracle in Buenos Aires , I haven’t proven this. I can never prove this truth, because it’s a matter of faith. However, all I’m asking my brothers and sisters is that you ponder the story I shared with you this morning.

Perhaps, the skeptic in you calls it all a bunch of lies. Perhaps, the unimpressed call it a coincidence.

Perhaps you’re a person of faith and you’re in awe at what I’ve shared with you. All I ask is that if there’s the slightest inkling in your hearts that what you receive in the Eucharist is the flesh of God, then please my brothers and sisters, never let the lance that pierced my heart in 2009 when that young woman stood carelessly over God’s fallen Body pierce my heart again. Please treat this mystery which you receive with the reverence God deserves.

HERE IS FR. JEFF’S RESPONSE TO ME WHEN I ASKED PERMISSION TO PASS HIS HOMILY ON TO YOU. Hey, I’ve heard it said that in any good homily we’re really preaching to ourselves. That being said, as familiar as I was with the homily before I delivered it, I found that in delivering it to the people it still had an effect upon my heart. For lack of better words it stirred me. Afterwards, I found that my celebration of the Eucharistic Prayer was even more meaningful. I can’t express how moved my heart was as I said those words, “This is my body.” Those words seemed to flow from my heart as if they were flowing directly from the Heart of Christ. The tone of those words almost became a tone of pleading on Jesus’ part, “This is my body,” “please believe me; this IS my body and I want all of you to believe and to receive my Heart of Love!” We are so blessed to have the Eucharist!!! Anyways, I’d be happy if you should share this homily with others; these are the miraculous stories that God wants us to share so that our faith can be strengthened. As it says in the Scriptures, “Encourage one another while it is still day.” It’s sort of like the Transfiguration which was revealed to Peter, James, and John so that they could persevere through the Passion and death of Jesus. And I wouldn’t even mind if you didn’t give me credit. After all, it is God who deserves all the credit on this one; I just did the typing. Blessed be the Name of the Lord now and forever!

3 comments on “The EUCHARISTIC SPECIES: The REAL body and blood of Jesus Christ”

What do you say? Cancel reply